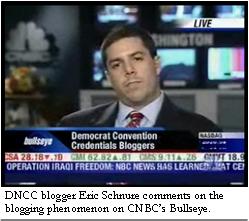 As an avid follower of media issues, I have been mulling over the coverage given to these pioneering bloggers who have been officially invited to "cover" the Democratic and Republican conventions in the United States. Relatively speaking, at the Democratic convention, it was an incredibly small group in comparison to the army of "traditional" media types. 37 or so bloggers given official accreditation versus 15000 newspaper, radio, and tv journalist with passes around their necks.

I would imagine the Howard Dean campaign had a lot to do with bloggers finally turning up on the radarscope of mainstream politics. But, there have been other factors as well. Bloggers have been, for example, given credit in getting the traditional media to cover important happenings that weren't covered at first.

The bloggers at the Democratic convention experienced a huge glitch right at the start - their Internet connection would not work. This was soon solved but then there apparently were only 12 chairs (and I presume desks?) for 30 odd people.

But, having ironed most of the issues, bloggers, as they are prone to do, started blogging. There was a fair amount of pressure, both self applied and also external. Russell Beatie, a guy who gets some attention in the blogosphere, even wrote a post telling them not to "fuck up".

So how did they do? There has been some expressions of disappointment. But, I think we, sometimes, these days forget that most bloggers aren't journalists and don't see themselves as such. I think Michael Feldman nails it on his blog:

Bloggers are different. We specialize in Perspective. At an event like the convention, we take our readers to the site of the news, give them a texture and context to help them digest the news, let them feel what it is like to be there.

We will never replace conventional media, nor should we want to. We are not competing with them, we are augmenting them. If we find a way to work together we can make the American people the best informed in the world.

So, also, what I also think has incredible potential is people who are both trained / experienced journalists and bloggers. The pioneers here are people like Andrew Sullivan and Josh Marshall in the US and people like Andrew Coyne, Paul Wells, and Jay Currie in Canada.

A solidly interesting week here in Kamloops, here in my life. At Rotary on Monday, Tim Larose from the New Life Mission came to speak to us about some of the very large social issues we need to face as a community. Some unbelievable numbers - the one that sticks in my mind is the 80 prostitutes that are currently working in the city. I remember when we only had one visible prostitute that I knew of. Now, I see many more - but 80. Wow! I think he also talked about a thousand when he talked about the number of clients the New Life Mission services, but I find that so hard to believe, I am going to have to confirm that.

After hearing Tim speak, I went to meet with Randy Diehl, the Chief Administrative Officer for the City. One of the great joys of living in Kamloops is the access citizens have to City Hall. Try scheduling a meeting with the Senior Manager in New York City, or for that matter Vancouver, in less than a week. I wanted to talk to Randy about some anti racism intiatives I am involved with in Kamloops and also about the prospects of doing some technology training with city staff.

The City of Kamloops, both through Council and the city staff, have been heavily involved in the Communities in Bloom program that encourages friendly competition among Canadian cities in making themselves very beautiful. All I can say is that Kamloops looks better than it ever has. There are incredible displays of flowers in traffic medians and in city heritage sites and parks. I hope this year, we have started a tradition that will carry on year after year, whether we have awards to win or not.

Darren Barefoot, a prolific blogger indeed, comments on a review of the gas/electricity hybrid Ford Escape. In city SUVs never really made any sense to me at all, but in the back country - now, thats another story. Where I live, one could make a case for the larger four wheel drive vehicle and if it is more fuel efficient and environmentally friendly, the case becomes even stronger.

When I worked in South Africa for Oxfam Canada, I had quite a lot of dealings with United Nations people. We were all working to help South Africans transition into a democratic society in 1994.

The UN operation exemplified the very best and the very worse about organizations that were inter-governmental in nature, as opposed to non-governmental. The UN had access to senior leaders in the South African police, military, and government that Oxfam could only dream of. They had credibility and clout in those circles. When it came, however, to moving fast in response to a grassroots situation, the UN team did not fare well - they had lots of rules and more bureacracy. Fast grassroots actions is where our little Oxfam team, and other non governmental organizations, shined.

The problem for the world now is that no fast moving NGO can stop the genocide in Sudan alone. We need the pressure that national governments and intergovernmental organzations like the UN can bring. In Canada, our former foreign minister made a statement on Sudan on July 16th. An exerpt:


I urged Minister Mustafa to address urgently the security issues affecting the internally displaced in Darfur. It remains the responsibility of the Sudanese government to disarm the Janjaweed and to protect the civilian population. The Government must address serious human rights violations, and prevent further war crimes and crimes against humanity from occurring in the region. Canada and the international community will be watching closely to observe the Government of Sudan's commitment to implement the joint communiqué it signed on July 3 with the United Nations

There are bills making their way through the US Congress and resolutions in front of the UN Security Council. I wonder if Germany or France would consider unilateral action to help stop this tragedy.

We need to invade Sudan...

30 000 peacekeepers - that should do it. We need to parachute soldiers into Sudan now to avert a crisis that, for some time now, has been far worse than what is happening in Iraq ( as bad as Iraq is). I have been hearing and reading snippets about what the UN is calling the worst humanitarian crisis in the world right now, a human catastrophe in the Sudanese region of Darfur. US Aid says the following:


The humanitarian emergency in Darfur is a direct result of violence and harassment directed toward the Fur, Zaghawa, and Masaalit civilian groups by Government of Sudan (GOS) forces and GOS-supported militia groups collectively known as Jingaweit.

According to Amnesty International, over "30,000 people killed, 1.2 million internally displaced and at least 130,000 living as refugees on the Chad border".

The Government of Sudan is now making noises about offering unfettered humanitarian assistance in, but according to the incredible "Passion of the Present" blog on the crisis,


Genocidal leaders know that once the conditions of mass mortality are set in train, there is little that can be done to stop the main thrust of the genocide.

Please read "Passion of the Present". I will link to them and to other stories about Darfur throughout the weeks and months ahead.

AND DO SOMETHING ABOUT IT. As a Canadian, I am going to try and organize a lobby to get our government to send troops to the region immediately. Also, we need to support groups like Amnesty International, Doctors without Borders and Oxfam.

I was sort of dreading going to see Fahrenheit 911. I guess I didn't really want to see those incredibly horrid pictures of wounded and dead people in Iraq, Iraqi and American. Especially the children, it destroys me to see that. Like the American soldier says at one point in the movie about killing people, just viewing it takes away part of my soul.

But, viewing these atrocities was also the most important part of the movie for me. Sitting in amazing comfort from a global perspective, we are so far removed from the harsh reality that, in the end, wars kill and maim a lot of people.

As I mentioned earlier, I think Michael Moore is a very biased documentary filmmaker. Now, I think that he would not deny that at all. He means to be provocative, he means to stir up some shit. I am not sure how he got all the amazing footage that he assembled. When he lets the footage speak for itself with no added embellishments is when the movie is the most impactful - the lady from Flint who lost her son in Iraq, when she visits the outside of the White House and breaks down comes to mind.

The most important thing about this movie is that people are talking about it. I hope they will talk not just about the person who made the film, but that they will also talk about the important issues the film raises - Has the human cost of the Iraq war been worth it? Does President Bush and his Cabinet have too close a relationship with Saudi Arabia and with certain companies that make billions out of war? Has the war on terrorism made us any safer?

I don't think George Bush is a bad person. I have pondered and answered the above questions for myself and I very much hope that John Kerry is the President of the United States come January.

I think I deserve my sleep today. Got up a little late but then got in the car and went to visit some of my favourite clients and friends. Cooked dinner. Called clients again in the evening....helped one install anti spam program extraordinaire, Qurb. And spent the last little while finding more new blogs to monitor....Good night world!

- Dooce: Following a link from Doc Searls, I happened on Heather Armstrong's blog and her writing took my breath way. Her latest post about, among other things, her battle with depression goes from really funny to incredibly riveting to unabashedly inspiring.

- The Teenage Pundit: The title of Andrew Quinn's blog = "the 60 year old political analyst trapped in the 13 year old's body". Only 2 clever posts so far, I hope we see more.

A fan of Sanbiki Japanese Restaurant

Even though we are a good 4 hours from the Pacific coast line, Kamloops does offer a good selection of seafood restaurants to choose from. I am particularly found of Sanbiki on Victoria Street. This bright Japanese restaurant offers so much more than just Sushi and Sashimi, my favourites on the menu. When a plate arrives at your table at Sanbiki, it looks great and the exceedingly fresh food tastes great. Heather and Masato, the owners, should take great pride in what they have created.

The War on Pornography

I don't entirely undestand why the Canadian and American government want to declare war on pornography. Pornography is legal, as is evidenced in the back room of many video stores. I am with Fleshbot (link slighlty risque) on this one.