Spending some real quality time on Omiydar foundation's network the past few days. There is a growing, pretty incredible community there. These are the values of the community:

* We believe every individual has the power to make a difference.
* We exist for one single purpose: So that more and more people discover their own power to make good things happen.

The network is steered by Pierre Omidyar who founded Ebay and his wife Pam Omidyar. They actively participate in the discussions. It's a little tricky to find the network. so if you need want to get involved and need some help, shoot me an email or leave a comment.

A very interesting article by Matthew Baldwin at the Morning News:

A while back I read an interview with a children’s birthday clown. At one point the interviewer asked, “What if you’re dying out there? What if the kids are hating it?” And the clown revealed a fascinating trick of the birthday clown trade: Every year, it seems, there are two or three funny words that invariably crack kids up, and when things are going sour, you can blurt one out and bring the house down. But a clown’s got to keep up to date, because the funny words mysteriously change over time. Where “booger” might have killed in 1998, 2004 demands nothing less than an “underpants.”

Wondering if there were more of these, I recently asked readers for their “tricks of the trade,” and was amazed by the response. It seems every profession is rich with clever little occupational secrets. Here are some of the best of what I received

Lunching with Jane of Pushkar

Had lunch with a most incredible person today - my friend Jane Birkbeck. I consider her one of my mentors, although I have never really told her that. Jane just returned from six months in India, spent partly volunteering for social agencies in Chennai and Bangalore. We talked about many things. She spent time attending a seminar taught by the Dalai Lama, who said right at the beginning of his teaching that whatever religion the attendees were before coming to him, they should stay with that religion. He has no desire for conversion. She attended the World Social Forum in Bombay (Mumbai) where she almost got very hurt trying to do train travel like an ordinary Indian and almost didn't get a hotel room (she had a great time after all that). She fought against Casteism at a Bangalore watering hole.

She said at lunch today that she really had nothing to give India. That she was resolutely there to learn. That's exactly how I feel. India, deep and ancient and wise in so many ways. What do we in the West have to compare to that.

Jane also went to Rajasthan, fell in love with a camel or two, and is now known as Jane of Pushkar. Click on the above photo.

There are not too many people in the service industry who consistently give great service. I just want to create a little space on the Internet to recognize a gentleman who always has a good word, always remembers my name, and makes me feel like an important person. Thanks Chris Metzner who works at Ric's Grill in downtown Kamloops.

A Refreshing Discussion about Religion...

I come from a family deeply influenced by two very different cultural traditions. My parents were born and grew up in India just recently independent of centuries of British rule. My father came to North America in 1962 to advance his medical education, and when he went back to India to get married in 1966, he brought my mother back to live with him in Canada.

We are Sikhs by birth but my mother was schooled by British Catholic nuns because that was considered, at the time, the best education by her parents. I followed somewhat a similar path as I went to Catholic school for all my elementary schooling.

My father grew up with a huge passion for the sport of cricket but, in Canada, the passion changed to focus on the sport of ice hockey.

I share these few anecdotes to underline the large worldview which I was born into - and now cherish.

I don't talk a lot about religion. I, like a lot of people I guess, am not keen to find myself in a contest whose unattainable goal is to determine who has the better God. I consider myself a spiritual person who tries to be good in his life. But, I don't actively participate in any organized religious group.

A short time ago, though, I was having lunch with a friend of mine, Tim Schindel. Tim is a pastor at the Gateway City Church in Kamloops. And, at this lunch, we did talk about religion. I have got to credit Tim with making me feel more comfortable than I have ever been with broaching this topic. Tim is trying to be an "unchurchy" Church leader. He feels approachable - the first time I saw him, he gave a invocation at a dinner that felt like a motivational speech. I think he might just understand what it might take to re-earn the levels of participation that organized religion once enjoyed.

So, I told Tim that my big problem with Christianity is that one of the basic tenets is that there is only one way to God. Having come from where I come from, I just can't accept that. How is every Hindu, Muslim, Buddhist, and Sikh (just to name a few billion people) wrong?

Tim told me he struggles with this and he measures part of his success by how well he can also appeal to the many people who believe what I do. He still believes his chosen way is THE WAY. I am not sure how my good friend will come to terms with this struggle.

Is there a big enough tent in Christianity to truly respect other religions? Will Tim be successful in getting me to go to an Alpha Course? Are there Alpha type courses available for those wishing to explore Hinduism, Buddhism, Islam, Sikhism, and other religions?

The Closed Olympic Loop meets the Open World of the Internet...

I still think of the International Olympic Committtee as the ultimate "old boys club", even though there are now women members. The power these people have and the secrecy with which they wield it - its pretty amazing. It's also proving to be more and more anachronistic. The Internet is forcing the issue of transparency and free speech onto the Olympic agenda. Quoted from Roland Tanglao's blog:

Interestingly, The International Olympic Committee has barred athletes, coaches and nearly everyone associated with a team from writing about their experiences for a newspaper or Web site - blogs included.

According to USA Today: "The IOC's rationale for the restrictions is that athletes and their coaches should not serve as journalists - and that the interests of broadcast rightsholders and accredited media come first." Yes, lucrative rights money comes first.

The only exception to the rule is if an athlete had a previously established Web site long before the games.

Roland thinks this ban won't hold water. I agree with the assessment entirely.

Into our second year of marriage....

What a wonderful day we enjoyed yesterday. I love you Marsha!!! 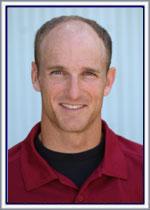 Darren Barber and I share the same high school alma mater - Brentwood College. I used to marvel at Darren's athletic prowess from the bottom of the teams of which he was at the top. We were once on a team, for a short while, together - an off term rugby team. He tackled me once in a practice and I still remember thinking "what the hell just happened".

Darren's real athletic love was for the sport of rowing and, after winning almost every national schoolboy compeition, he went on to become a member of the Canadian senior national team. He won an Olympic gold medal in 1992 in Barcelona.

As I think of Darren the Olympian, I also reminded of our history class in Grade 9. It was 1984, another Olympic year, and the year when Canada first won Olympic gold in rowing. Our history teacher, Rob McLean. had decided that we should hold in class debates on the Olympic movement. Darren and I were paired together. I had a little experience in debating, but Darren didn't. And, as I remember it, Darren didn't then know the foggiest thing about the Olympics. He stood up to make his speech and just simply stood there frozen. Then, he sat down.

Fast forward 20 years, and Darren has forgotten more about the Olympics that I will ever know. What an amazing accomplishment on his part - a Gold in 1992, coming really close to a medal in 1996 in Atlanta.

I remember Darren as a gentle fellow with no arrogance or ego, depsite all his high school accomplishments.

I guess the most amazing thing to me came from an article I read in the Vancouver Sun a month or so ago. I read that Darren was close to making the Olympic team again. I looked at some of the bios of the other people trying out - most of them at least 10 years younger. Darren didn't make the team in the end, being one of the last cut. But, sure as sugar, it took amazing guts and amazing committment for Darren to try again, and it likely pushed some of those young whippersnappers to perform at an even higher level.

So, today, I tip my digital hat to Darren Barber, an old friend, an awesome athlete, and as I see from his bio on Rowing Canada, soon to be practiciing medicine. Wow and way to go, Darren!

Spent a relaxing and slighlty decadent weekend in Vancouver this past weekend. First, another great pasta meal at Chianti's restaurant on 4th Ave. Then, slept in on Saturday and, when I got up, found the apartment where we were staying had free wireless Internet access courtesy of unknown neighbors. Thanks folks!

Saturday evening, we had Thai food and then Saturday night, we watched one amazing display of fireworks with 80 000 of our closest friends. Sunday, again a bit of a sleep in, then breakfast at Milestones on English Bay, shopping snacks and a movie at Oakridge Centre ( we saw iRobot). We really wanted to get back to Kamloops but we felt like we had to be fair with our dining diversity so we went for the all you can eat at Tanpopo. Got back kinda late last night but didn't regret it one bit.

Over the past weeks, I have signed up some pretty exciting new clients on my Unlimited Internet Coaching service. Some of these people I have known for a while, but I am looking forward to enhancing these friendships through more consistent contact and interaction. First, Maury Dawson - a mortgage broker with Intercity Mortgages in Kamloops. Maury and I are both members of the Kamloops Networking group. Maury's children are extremely active in sports, he tells me. His son may pursue a career as a NHL referee. I also now have the honour of calling another member of the networking group, Ken McClelland, a client. Ken is a realtor locally, afilliated with Remax. As I have written about before, the Kamloops real estate market is hot right now and Ken brings 15 years of experience to this heady situation. Ken's web site is still a work in progress but that's absolutely something I can help him with. I met with my latest client today - Jim McLean, owner of Peak Events and Catering. Jim is working to promote his startup Kamloops catering company. I must say he has an awesome web site...we just need to get more people knowing about it. Jim also provides a shopping service to visitors to Sun Peaks Ski resort.