Just want to pay my respects to two incredible humans who have just passed.

"Inordinately modest and self-effacing, the one-time lawyer who launched Amnesty International in 1961 would never claim credit for the sea-change of the last 40 years. He was offered knighthoods by almost every successive British Prime Minister but he never accepted."
Peter Benenson passed away at the age of 83 on Feb. 25th 2005. More here...

"Jef created the Macintosh computer as employee number 31 at Apple in the early 1980s, revolutionizing computer interface design. Jef invented "click and drag" and many other methods now taken for granted by computer users. "
Jef Raskin passed way at the age of 61 on Feb.26th 2005. More here...
Last Audio and Video Interviews here...

May they rest in peace.

Halle Berry Shines Among all the Oscar Stupidness...

I often wonder if the best films and the best performances win the Oscars. According to Wikipedia, as of 2003, there were only 5816 people who get to vote to determine who gets the gold statuette. The amount of money that studios spent to campaign for their films is quite staggering, (in the milllions of dollars) even though the rules for campaigning have been tightened:

from the Concord Monitor

"even some of this year's best picture nominees say the spending is out of control. "The time and money that goes into these campaigns is so disproportionate to the budgets of the films," said Michael London, the producer of Sideways. "The more money other people spend, the more you have to spend to remain competitive."

Is the Oscars just a popularity contest with very pretty people fragantly (and often embarrassingly) posing on that long red carpet? I am beginning to think so. I mean whether you like a movie or not is quite subjective, no?

That is why Halle Berry is my newest favourite actor. Showing she is not above making fun of herself and sending up the whole awards process,  she actually showed up to pick her "worst actress" award at the annual Razzies awards. I think this is a first hand account, I think:

"John Wilson (head razzie) announced that Berry had "won" the award and immediately looked to his left. "Here to accept the Razzie is… Halle Berry," Wilson said with a note of surprise in his voice. To everyone's total shock, the actress walked out onto the stage clutching her Oscar in her hand.

Wilson handed her the Razzie award and she took the podium. The crowd lit up at this point, giving Berry a standing ovation for her gracious acceptance of the disgrace. Feigning tears of joy, Berry did a point-perfect send-up of her own Oscar tearful showing when she won for Monster's Ball at the 2002 awards. "

A gruesome photo of reality in Darfur (from the New York Times). Found on the ever vigilant Passion of the Present blog. 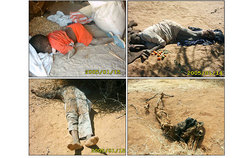 I still believe we need to invade Sudan to stop the killing...

A Visit to Kamloops City Council

I attended the Kamloops City Council meeting this past Tuesday. I figured it would be a great opportunity to learn more about the types of  issues discussed and decided upon by City Council. I am considering running for City Council myself.

I was generally impressed with the meeting and plan on attending again. Here are some of my quick impressions:

"As part of the transition to the new treatment system, pipes and reservoirs are being cleaned of residue and sediment from the formerly pumped water. Cleaning the 560 km of water mains is expected to take at least three years.

"Until the pipes are clean, residents will occasionally experience turbid water as demand increases in the summer months and water flows through pipes at a higher rate. Also, turbidity will be noticed during fire hydrant flow-testing and water main repairs."

So, during the summer month until 2008, our water may still be quite muddy. As well, Residents should pay attention to any water or fire hydrant repairs in their area.

This blog quoted in both Kamloops papers - on the same day!

Wednesday evening made for some interesting reading. Much to my amazement, this blog got quoted and a tiny bit misconstrued in both local papers.

And my friend Dale Bass, in her Kamloops This Week column, referred to this post I wrote about the Venture Kamloops sponsored "Branding Kamloops" workshop.

I did feel my posts were a little misconstrued. This could be my fault, for sure, as my writing is not always as tight as I would like it.

Anyhow,  that is nothing that 2 letters to the editor, now written and half sent, can't remedy.  I will post those in the next couple of days. 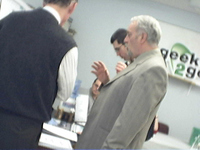 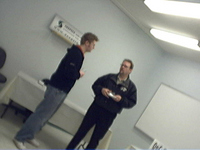 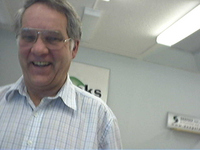 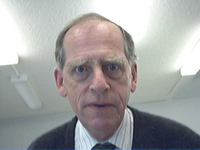 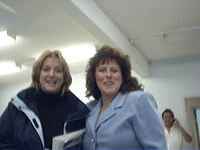 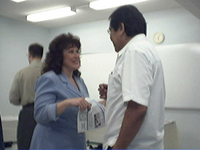 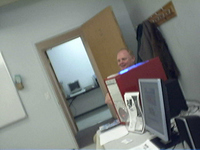 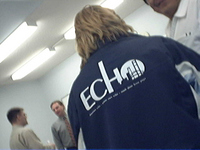 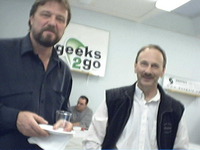 taken with my logitech notebook webcam

I am live blogging from the North Shore Business Improvement Mixer and Tech Trade Fair.

I have met some great people including Denis Abramsen from the Interior Film & Training School, Roger Parkes from Kamloops Toner Cartridge and Recycling, and Kevin Wolfe from Wolfe Carpet Cleaning and Upholstery. And, of course, Wenda Noonan from the Downtown Echo and the North Shore funny pages.

It is great to get out and meet new people and old friends alike. The room we are using at Panda Computer Training never really fills up but this is actually a good thing. We all get quality time with each other. 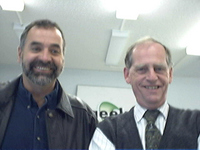 This last bit is courtesy of Wenda Noonan who took over my keyboard: And of course here are the cheesy duo - John Woolner of Penny Pinchers and Peter Mutrie of the North Shore Business improvement Association. Say gouda, boys! What a conference NorthernVoice turned out to be. A great mix of people with lots of diverse interests. I was not disappointed. Arriving early Saturday morning. I was reminded of the great responsibilities the organizers had taken on. I mean, they couldn't really let loose and truly enjoy the conference because they had to worry about so many things. I would catch Darren Barefoot peeking in and out of sessions I was attending, likely walking round all the sessions to check if all was well.  I want to again thank the organizing committee for all their hard and good work. The conference was stellar.

Quite a few interesting questions came up in the Intro to Blogging session, which I helped facilitate. One that comes to mind was whether blogs are more susceptible to getting or sending  viruses. This question took me by surprise, although it was a good question. Because blogs are a lot about linking, can someone linking to you or you linking to someone cause virus transmissions. I think participants might have been relating blog linking to sending and recieving email. All of us trying to answer questions came to a similar answer on this one. Your blog is no more sucseptible to virus infection than a normal web site.

Another question revolved around how to find interesting blogs. There was some discussion about blog recommendation sites. Mentioned most was Bloglines service but I think Bloglines is a little too difficult to use a a recommendation site. I suggested just typing in a search term into Google and then adding the word 'blog' at the end. I then would search the blogs that I found for links to other blogs. This practice has not failed me yet.

I am about to end an incredible day with 8 to 9 hours of much needed sleep. I want simply to say that I truly enjoyed the NorthernVoice conference and will be posting more impressions tomorrow evening.