Much too hard for Citizens to get information from government...

I would like to note that I capitalized the word 'Citizen' in the title of this post. I did not capitalize the word 'government'.

Every once in a while (or much more frequently in fact), I believe it is important to realize who is really important in our democracy. That is why I am pleased as punch to see 45 newspapers all across Canada work together to conduct what the Canadian Newspaper Association is claiming is the first national audit of freedom of information laws in our country.

The media obviously undertakes a lot of freedom of information requests. But, members of the general public do as well. A Vancouver Sun reporter went to the Vancouver School Board to ask for bulling statistics in one local school. At first, he did not identify himself as a reporter and they were very hesitant to give him any information. He went back an hour later and showed his credentials as a reporter and they were much more comfortable talking with him.

Thats a bit baas ackwards, if you ask me.

Blogs that I must read...

I hate the phrase "think outside the box".  It is so common now that, whenever I hear it, despite the often good intentions of the person talking, it indicates to me the totally opposite type of thinking.

So, I conciously look for people who have put the box in a huge rocket launcher and aim for the furthest point the launcher can reach.

And that's also why I love the Creating Passionate Users blog - written largely by someone I would absolutely love to meet - Kathy Sierra.  Kathy starts with ideas that seem totally way out there, and then she puts together insights and arguments that make the ideas appear as they truly are - pure common sense.

Mom Holds a Garden Party for a Great Cause...

My Mom, Manju Singh, is one of my heroes in this world. A pretty amazing lady - a whirlwhind of energy and Love.

Mom is holding a Garden Party for the Kamloops Art Gallery this Sunday. Here are full details:

On the banks of the Thompson River, in the lush garden of KAG supporters Manju and Gur Singh, the Kamloops Art Gallery is hosting its first garden tea party. Along with the traditional fare of afternoon tea, festivities include live music by Norah Ashmore & Friends, displays of regional potters’ tea wares, and a stroll through one of Kamloops’ most beautiful gardens. Tickets are $15 each.

Today, my friend Al McNair announced that he will be running for Mayor of Kamloops. His new campaign web site even has a blog. I think that is awesome!

I noticed that the mcnairformayor.com domain name they are using was registered way back in early January, so clearly Al has been thinking about this for a long time. He is a respected community leader and I look forward to his announcement sparking a substantial discussion of the important issues in our community.

I think Al announcing his candidacy this early really is a good thing - as he said in his speech today:

Many have asked me, why announce so early?

Because it isn’t early. I need time to knock on doors and talk to folks about their issues, their vision of Kamloops in a relaxed manner before the excitement & pressure of a campaign kicks in. We need to get it right.

Having a read of The Fast Food Nation...

My sister bought me an interesting book for Christmas. At first I thought Fast Food Nation was going to be the print sibling of the movie Super Size Me. But, while Super Size Me was a 100 minute long movie which featured the filmmaker taking the extreme move of eating food from McDonalds every meal for 30 days, Fast Food Nation is an extensive 280 or so page study of the entire industry fast food  has been instrumental in creating. At the end of the book, there is 70 or so pages of footnotes.

It is a an interesting read with a distinct point of view built on a meticulous mountain of facts. Basically, the premise is that the "industrialization of food production" contributes to weak labour standards, the destruction of small scale industry and substandard unhealthy food. There is an exhaustive section on the meatpacking industry that made my skin crawl.

We took a short day trip to Kelowna yesterday. Scenically, a really beautiful setting. Lots and lots of shopping malls as you drive into downtown - like many places. The layout of the malls reminded me a lot of what you also see in Richmond, near Vancouver.

Kelowna has a lovely waterfront and an aging yet charming downtown. Would love to walk through Kelowna's downtown core on a workday to get a sense of the normal vibe. I think Victoria Street in Kamloops is a nicer main street but of course I might be  biased.

Dined at the Kelowna pub named after a Kamloops Legend. Doc Willoughby's pub is owned partly by David Willoughby, who named his establishment after his Grandfather. Dr. Charles Willoughby practiced medicine in Kamloops for many many years and served a term as our Member of Parliament.

Glad I checked my voice mail today. I left my cell phone at the university radio station on Friday.

Petti Fong, from the Globe and Mail, called me to ask for my comments on the BC election campaign as it is unfolding in Kamloops. Enjoyed talking to you Petti!

I might have some of my loud mouthedness displayed in the Globe tomorrow. Those poor readers....

Petti also asked me to keep her updated as to interesting news from Kamloops. Readers from Kamloops - please feel free to let me know if you think you may have something interesting and I will let Petti know to call you.

Why I am voting Green on Tuesday... 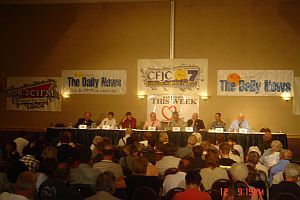 A rare of photo of almost all our local candidates in BC's Tuesday election.

I have angered some of my friends who are partisan BC Liberals because I have publicly said that I am unable to vote for the Liberals this time. My issue is not really left /right but more concerns how political parties engage with the public and try and represent everyone. The Liberals seemed to give up on large segments of the BC population right from the get go in this election. They have run an closed campaign, and because of that, I decided I couldn't vote for them this time.

I was pleased that many present BC New Democrats disavowed the divisive and financially irresponsible NDPs governments of the 1990s. I still can't get over the fast ferries fiasco however. And, in this election, the NDP has spent precious little time telling the electorate what they will do. They have spent too much time "holding the liberals accountable" - this of course consists of exaggerating Liberal shortcomings as far as they can be stretched for political gain - and its really ugly.

Now we come to the Greens. I spend a lot of time these days preoccupied with how humanity has interacted and can interact with our environment. I thank my friend Grant Fraser and the World Changing web site for inspiring this initially.  We need to have a much more healthy and functional relationship with our planet. This to me is a most critical priority. We are presently living quite unsustainably.

There are huge opportunities in being in the vanguard of positive change. I agree the BC Green Party is not ready to govern today, but I see a huge value in helping the eventual election of a Green MLA. And I absolutely don't think voting Green is a wasted vote. If it helps keep the movement alive and helps it grow, that's great.

I see the Greens as still too new to be jaded by old style negative politics that both the Liberals and the NDP hold as gospel. I think they might listen to people who want something more hopeful and positive.

I know the local Green candidate that I will be voting for. He agrees that he has not run the best candidacy. His drives this fossil fuel belching old RV, for chrissake.

But, the larger values of the party and the movement are ones I can get behind in 2005.

When I first started this blog, I struggled to come up with a name. I think the first stab was something like "digital renaissance".

When we got married, one of Marsha's nicknames for me was "chunky chicken". I thought it was a cute but also winced a little everytime I heard it. The things you love for love.

One day, I was explaining to Marsha the use of the word "ji" in hindi and punjabi. Ji denotes respect, kind of  like "sir" or "mam". I was giving her examples like "Auntie Ji" and "Uncle Ji". And Marsha blurted out "Chunky Ji". We both had a great laugh - and, at an Internet cafe in Darjeeling, I rechristened this blog with that name.

I like change though. And so I have decided, after 18 months, that a rebranding is in order. This is my space to play.

May the new name last at least 18 monthes and one day.

Back when this site was a newborn, I blogged for three months from India. Marsha chimed in here from time to time as well.

One of Marsha's first questions about India: "where did all these cows come from".

28 000 cows freely roam the streets of India's capital, New Delhi -  one of the most important cities in the world. This is due, in part, to Hindu religious teachings and, in part, to a thriving underground economy - many illegal dairies derive their raw material from kamikaze milking of these cow's udders.

Many Indians consider the stray cows a nuisance - a traffic hazard, a symbol of backwardness. Others believe that cows are to be revered and not touched.

I am reminded of all this because of this story I just came across. Seems the New Delhi court has come down on the nuisance side of the divide.