I think the American Trial Lawyer's Association might have wished their sign maker had used slightly different verbiage: 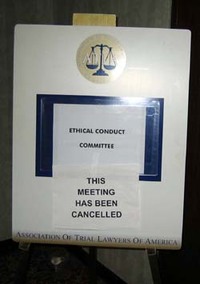 The joys of checking through the Typepad recently updated list every once in a while.

I disagree with Telus blocking its Internet subscribers, and perhaps others, from viewing these two union friendly web sites - Voices for Change and TelusScabs.

As much as I hate the term 'scab', I am one of those who think that I might disagree with what you say but I will fight for your right to say it.

Other bloggers have covered / are covering this story very well:

Good on you fellas! 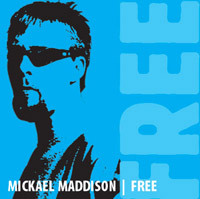 I met him as a techie initally. But, Mike Maddison's talents expand way past technology. Mike maintains a great blog, for example, where he writes eloquently on many societal issues.

Now, Mike has become a Rock Star, having released his first EP entitled "Free". I have heard it. It is very good. I am, in fact, kind of suprised that a geek has such bad ass lungs. I shouldn't be though.

Congratulation Mike!  It is a great pleasure and honour to call you my friend.

I arrived a tad bit late for city council today and missed a short while of the public delegations. I caught the last portion of Ken Walcott speaking about the 2005 Baseball Canada Senior Championship in late August. Ken made an interesting request of council asking that an exception be made to the City policy that do not allow city grounds staff who volunteer for a ground event to use city equipment. The policy seems to exist because of WCB (injury compensation) and assorted labour issues. City Staff, at the direction of Council, are going to try and find a way around that.  Many find the policy a little strict, but these various legal issues come into play, many for very good reason.

Professor Eric Reeves, who has spent the past 6 years studying Sudan, has written an important overview of the Darfur Genocide in Western Sudan. I blogged about Darfur for the first time a little over a year ago. Then, I wrote that reports pointed to a figure of 20 000 who had died. Now, over 300 000 of our African brothers and sisters have perished. And people are dying at a rate of 6 000 a month over normal mortality rates.

We need to keep blogging about Sudan.

Reeves calls for NATO intervention in Sudan. And, again, I agree wholeheartedly. The world is watching mass murder again and those who could stop it are not.

The "Hand up, not a Handout" Educational Payment Scheme...

Found an interesting reference in the Education in India weblog to Ezra Cornell's idea of letting students pay for a university education in "sweat equity" rather than in cash. Cornell played a large role in the early days of the telegraph and later founded Cornell University.

K Satyanarayan, the author of Education in India, writes:

Could/should this be revived? Would it work well in today's world? What do you think?

I think it should be revived. Unless on some sort of scholarship, the only way I am aware of that pays the full cost of university, is if one commits to join the US (?Canadian ?other country?) army. I think there is a lot of other jobs in society that have national importance. Why not expand the possibilities? And give students pride and self confidence to boot.

In India, obviously, this issue of people with not a lot of money getting good educations is a huge issue.

Thursday's training meeting of the North Shore Community Patrol went off well - (huge sigh of relief). I continue to try to help integrate social service agencies into the effort, in my small way.

Had a longish telephone conversation with the City Crime Prevention Officer yesterday. I felt, and he would hopefully agree, that he has a very hard line view o f all this. He said that he has little sympathy for "bad people" - a group in which he includes prostitutes, as well as drug dealers and thieves. He said that his goal is still to move prostitutes out of the North Shore. But, I and a lot of other people, ask a simple question - "where".

I am beginning to think prostitution needs to be legalized and regulated and brought out of association with a whole range of much more serious criminal activity. The other question I have - would anybody really choose prostitution, if they had other choices? Interesting and important wheels turning in the old brain here.

On Tuesday, went out with 27 other people and was part of the first North Shore Community Patrol in Kamloops. We went out from 7pm to 9pm. We witnessed a few questionable things going on and, for the most part, the people involved dispersed very quickly once they saw us watching them. I spent much of the time walking with some wonderful ladies who live on the North Shore and they pointed out a lot of things I was not aware of - good and bad. They have an abiding love of their neighborhood and they are deeply concerned about the drug houses that have been started amongst them. They pointed a drug house out as we walked on a quiet, otherwise very beautiful street. It was very quiet when we went by (perhaps it wasn't open yet), but I drove by later in the evening and saw it open. It made me very angry. One of my new friends told the group that one elderly couple who have lived in the same house for almost 50 years had felt the need to finally lock their doors two years ago.

As angry as I feel about drug dealers, I feel very bad for people with addictions and/or who are selling their bodies on the streets. It must be, in fact Im damn sure it is, horrible. And I don't believe the solution is to drive them somewhere else. I think we have to try as hard as we can to help these people get clean and live of life of life of dignity and happiness. Whatever success we have, however small, is worth the effort.

The Community Patrol had another training this evening and I invited a friend of mine who is a street outreach worker to attend. She brought two of her colleagues with her. It was a little tense because the outreach workers don't currently seem to think much of the patrol. But, I wanted to try to create a working relationship so that the patrol can be seen as a friendly thing, not a hostile thing to people who already down and out.

If I had thought it through better, I might have invited the outreach workers to a smaller meeting first, so that we could have ironed out some of the differences. Unfortunately, I had to leave the meeting early. I spent much time after fretting about how the meeting would go. I will try to find out tomorrow.

Sitting at my desk, a column to write

Just finished writing my weekly (usually) Internet tips newsletters for my clients, and now working on figuring out my content for my newspaper column.

Undoubtedly, I am most well known in the world for my column. Its become a regular part of my life.  Often, people stop me and talk about things I have written. I really appreciate the interaction.

What's a little troubling about the column is that I don't think I devote enough time in putting it together each week. Often, I will spend about an hour - lately especially this has been the case. The column appears in eight publications across BC and Alberta. I get paid about $2.50 to $5 a column.  I don't charge Kamloops This Week, as they were the first paper I wrote for and also because Kamloops is where I get almost all my current business - so, the Kamloops columns help promote my business.  Thats the current situation.

I have, as always, got a lot planned and currently on the go. I am thinking very seriously of running for Kamloops City Council and starting to seriously work on that. I am working on my new book, tentatively entitled The Friendly Internet Guidebook 2006. And I have got this  idea germinating in me - an for profit business or a non profit society (haven't quite decided which) dedicated to helping the general public better understand important issues in society and politics. The thinking continues on this last project...

40 things that happen only in Movies...