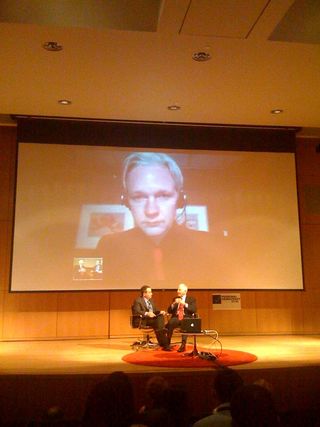 Whistleblowing Then and Now Session at PDF10. Micah Sifry, Daniel Ellsberg, and (via skype from Australia) Julian Assange.

{This post has turned into a bit of a monster. I still need to bold text to signpost different sections and to add links)

I was really happy to make it down to New York City for the 2010 Personal Democracy Forum (PDF) conference. In its seventh year, the conference is an incredible opportunity to meet and learn from some incredible people who use the Internet and other digital technology in politics, organizing, and democracy promotion.

I want to give a huge shout out to the folks at PDF and at Civicolive - who have posted audio and video from most of the conference sessions already. I love it when conferences do this!

I have pages of notes from the three days I attended. It will take a while to process all the ideas and experiences. What follows is a sort of a overview:

Day 1 - Mobilize your Cause "Bootcamp"

This was a pre-conference session, held on Wednesday June 2nd, at the CUNY School of journalism. JD Lasica, one of the early leaders in the whole social media and citizen journalism world, hosted the seminar. JD was joined by the effervescent Katrin Verclas, who added incredible experience and wisdom in using mobile technologies for social impact. One of the great attractions of the session for me was the chance to hear Craig Newmark speak. Craig is the founder of Craigslist and has really added his energies and profile to promoting better democracies.

I was so pleased about how this session was organized. We were about 40ish attendees, assembled in a circle, and Katrin gave a great runthrough of the agenda and also took pains to make everyone feel comfortable. JD was methodical about getting through a great amount of content and Katrin would energetically add her insights. We heard from social media organizers from a national immigration reform campaign in the US  who are using text messaging to inform and motivate supporters.

A list of many of the resources from the session is online at the JD founded Socialbrite.

About Craig Newmark, it is hard to believe how accessible and down to earth Craig is, give his fame. Craig spent a bit of time talking what makes good communities. His thoughts were simple and straightforward:  social media at it's core is about skills around talking to one another; the Internet allows you to scale up what you do know to pretty large numbers; it is key to engage the community and share the results; treat people as you want to be treated and build a culture of trust; success brings trolls, fraudsters, and well meaning people who are very opinionated.

At the end of the bootcamp, we broke into small groups of four or five. I found out that sitting beside me were some really accomplished people - Sam and Christine(?) from the International Gay & Lesbian Human Rights Commission and Josef Barz, a digital strategist, who ran the social media campaign for the President of Austria in the 2010 Austrian elections.

The first full day of the conference was held at the CUNY Graduate Center, basically across the street from the Empire State Building. I didn't really expect to meet anyone I knew, but one of the first people I bumped into was Troy Lanigan, President of the Canadian Taxpayer's Federation (CTF), who was attending the conference with the the CTF's National Communication Director Scott Hennig. I know Troy from our work together on electoral reform in BC.

First up on the agenda was a keynote conversation with Jimmy Wales, co-founder of Wikipedia. A couple of really interesting insights from this talk: Jimmy talked about how the current of ease of access to public information might cause us to re-think what governments should make public (should someone's indiscretion 25 years ago come back to haunt them today?); also, Jimmy promoted the use of wikipedia as a source of substantive information on breaking news stories. This was juxtaposed against mainstream media coverage which can be repetitive and sensational in nature.

Next up was a conversation about whistleblowing. Julian Assange, founder of the now famous wikileaks web site, and Daniel Ellsberg, who leaked the Pentagon Papers and exposed many uncomfortable truths about US strategy in the Vietnam war. At this point, I should mention some of the tech problems at this point in the conference. Unfortunately, Assange's skype connection kept crapping out, just as Jimmy Wale's microphone did earlier. This must have been very frustrating for Micah Sifry and Andrew Rasiej, the conference organizers and founders. I did hear Assange make a strong argument that whistleblowers hardly ever get exposed and that he is committed to making heroes out of those who do get exposed.

As many eleven different people then took the stage to address the conference theme "Can The Internet Fix Politics?". Many of these talks seemed more like sermons, delivered with a lot of "you need tos". I hope I can overcome my slightly resistant attitude to that approach and take their ideas to heart. Highlights for me were listening to John Perry Barlow's poetic words about the struggle for the soul of the Internet and Eli Pariser's strong caution about Internet personalization narrowing our informationscapes to only stuff we already agree with, he called this the "filter bubble".

Over lunch, I lucked out to sit with Adam Shedletzky, who is part of an effort to build a Canadian version of MoveOn.org, called LeadNow. I am very interested to see how the LeadNow effort unfolds.

I attended two breakout sessions that afternoon - one on innovations in online campaigning among US Republican campaigns and one on Government as listening to mattered. I was quite interested to hear from Rob Willington who ran the social media campaign for Scott Brown in the US Senate race in Massachusetts. Scott Brown's signs put up a phone number to text as opposed to a web site address. This was a recognition that a web site can be easily found through a search engine and that text message campaign typically attract the most active and plugged in supporters. The campaign also made use of mobile web apps to help supporters campaign door to door. These replaces traditional "walk books" which are time consuming to put together. On voting day, the campaign texted supporters to ask their friends to come vote with them using the slogan "don't vote alone".

The session on listening was really interesting. Lots of wisdom on that panel. Harvard Professor Jane Mansbridge framed up the discussion provocatively when she stated that the forces of polarization are irreversible, and we needed to figure out how to use technology to weigh in on the other side. Stanford Professor Jim Fishkin talked about his deliberative polling methodology. Noted online communities expert Howard Rheingold talked about the echo chamber / silo problem being accentuated by the Internet and also talked about the importance of moderation in online communities.

At the end of the day, a range of different companies presented technology designed to aid political and issue campaigns. Highlights for me were Visible Vote (not yet available in Canada ) and a presentation on data visualization (called "Chart Wars") from Alex Lundry.

The last session had a diverse group of Internet luminaries talk about whether the Internet helps or hinders democratization.

I had a great conversation with Howard Rheingold at the conference evening reception.

This is the day I became painfully aware of the red/blue divide in the US. The conference attracts mostly democrat / left leaning types, but what makes it so great is there is also healthy representation from republicans / right leaners. The problem was that there was quite a bit of open partisanship going on and I sincerely hope this does not upset the delicate balance the organizers have so carefully struck.

I should also mention the organizers and thank them profusely. Andrew Rasiej and Micah Sifry, you have done an incredibly amazing job. It was apparent to me, watching you on stage, how much this work means to you and I am really thankful for the amazing opportunity to gather that you organize.

Following the keynotes, there was again a series of shorter talks based on a "rethinking theme". Code for America is helping 5 cities, in an initial phase, use technology to make their governments more "efficient, transparent, and participatory". They are actively looking for fellows to help. Bryan Sivak, CTO for the city of Washington DC, talked about the creation of a open source suite of municipal software from which cities from across the world might draw. In a rethinking economics talk, Prof Bernard Avishai spoke in favour of the government setting standards that allow for more competition in the marketplace. He argued that the government mandate of the same plug to connect to a vehicle's electronic system allowed for smaller mechanic shops to compete with the big auto companies. Susan Crawford, in her presentation on broadband, issued a call to arms to all those in the room to get involved in the titanic battle to maintain open access to the Internet. She stated that Internet access need to have regulatory oversight to ensure it's openness and she was highly critical of AT&T and other telcos for allegedly unsavoury tactics on the other side of the battle. This was a pretty bold move as AT&T was one of the conference sponsors. It was really interesting to hear Markos Moulitsas talk about the early days and guiding principles behind Daily Kos.

The next three talks kind of blew me away - they were absolutely chock full of insight and innovation.

Take Marc Smith's demo on NodeXL. As an organizing tool for social media influence, NodeXL seems like an incredible tool. The only problem for me is that it runs on Windows, and I have a Mac. You can see connection between people and networks. More importantly, you can see people who are talking about a topic but aren't really connected to anybody else talking about the same issue. Read Marc's blog post about his demo.

Clay Shirky's talk about the increasing social media political noise crowding out social media political signal was brilliant and insightful. Basically, this deserves its own blog post, but at the core, seems to me Shirky was advocating for elegant methods to allow people to have a voice without crowding out other voices and for raising the cost to communicate so that the ease of communication we have today is less abused.

It was again amazing to hear from Howard Rheingold, who talked about the need for new discipline when it comes to the use of social media. He also mentioned the importance of digital literacy and best practices of collective action.

I went to a couple more sessions at PDF10, but I should probably put my impressions about those into another post.

Hey Arjun - I would not have understood a thing in that conference, nor your ability to have posted this had I not been in our very enlightening program and covered the ground that we have - which has certainly brought me up to date with just a few shreds of insight as to what's happening with the new media - most applicable to the end of our current course and most practical to our future work as communications practicitioners. Thanks very much for your enthusiasm, energy and generosity in sharing the conference highlights. Good on!
Colleen

Arjun, thank you for this! The world has looked so different to me ever since starting our Royal Roads program...and your posting about this conference is just another example of how we, as a cohort, can learn so much from each others experiences. Thanks!