Doing democracy better: some thoughts on day 1 of the 2012 NCDD conference.....

It's such an incredible joy to be at the 2012 US based National Coalition on Dialogue and Deliberation (NCDD) conference in Seattle. I have long been interested in finding respectful, empowering, and collaborative ways to "do" democracy. And NCDD is a network of people who work together to find the same. C2D2, the organization i have the honour to cochair, in a very real sense, is an offshoot of NCDD. I feel very much at home here, as I do with C2D2 and with IAP2.

Eric Liu, the keynote speaker today, noted that we are in a moment in history where people are very interested ( hungry, was the word he used) in reclaiming their citizenship. NCDD seems very well placed to help facilitate this reclaiming process in a hopeful and positive way. A couple of data points. 10 years after the founding conference, this NCDD conference has many more sponsors than any previous. The evening reception was in a ballroom ringed with booths and tables from people, organizations, and companies showcasing their work. When plenary attendees were polled, fully 40% indicated they would conduct dialogues wherever they were asked to do so. There is so much great stuff going on and such strong committment. I'm ending my day very inspired.

I love that public participation conferences often attend so well to different facilitation, learning, and recording styles. The plenary and workshops today mixed presentations from the stage with different types of group work. An amazing group of visual recorders made the various themes and ideas come alive.

The theme question of the conference this year is how can we help build a more robust civic infrastructure. I was really happy to see a session on the role of journalism in this noble effort. We had some great presentations and discussion on the convening power within journalism, about journalism helping communities imagine possibility, about creating more (non traditional) journalism, and about much more. My personal starting point is that journalists and public participation / democracy advocated would do well to figure out how to learn from each other. The media is such a powerful force in creating and keeping culture. I dream of a day with a healthy ( financially and otherwise) media which embodies dialogic and deliberative principles, at it's very core.

Technology Threatening the Raison D'Etre of A Youth Hostel? 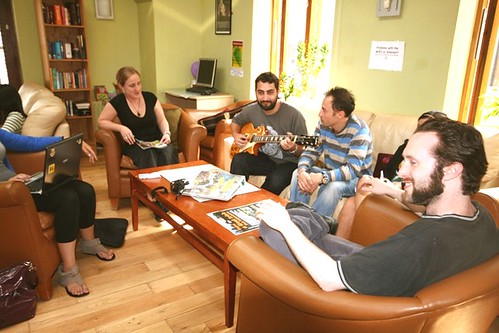 Recently had the opportunity to spend a couple of nights in a backpackers hostel in Halifax Nova Scotia. First time I've stayed in a hostel in quite some time. I have very fond memories of staying in hostels all over Southern and East Africa in the mid 1990s - such amazing camaraderie. You could always rely on your fellow travellers for friendship, tips, spare toiletries, etc.

I spent very little waking time at the hostel in Halifax. On my quick walkthroughs through the common areas, I saw a lot of people face down, staring at computer screens. I wonder if some of the old camaraderie is being lost. Just a curiousity really. Not at all a statement.