Interesting information gleaned from a talk by Al Knight, Chief Returning Officer (CRO) for the Kamloops Thompson Federal riding. It's gearing up for election time here in Canada:

Special balloting
People can actually vote anytime during the election campaign. The CRO's office opens the day the election is called and people can vote that same day. Makes it rather convenient.
No excuse not to vote, even if out of town.

New locations for polling stations
Al is, for the most part, pulling out from using schools as polling stations. He mentioned that can be quite a huge disruption on a school day. The chosen alternative might create a little more parking challenges. Seems to me that the a large part of the plan is to centralize polling stations into fewer and larger stations.
Get the polls at off peak times, eg during the workday.

Political parties actually run polling stations on election day
Al explained that the winning and second place party from the election previous get first right of refusal for all the positions in the polling stations. Am I the only one that finds that a bit weird? In theory, the chief poll captain and the 2nd in command are of different parties but I got the impression that doesn't often happen. Saving grace of all this is that political parties can't likely usually volunteer the amount of people needed to run the election.

All in all, very interesting

On Wednesday, Peter Katz, one of the leading figures in the urban planning movement called New Urbanism, came to Kamloops to talk about what New Urbanism could mean to our community and for other small communities across the world. I like the concept behind new urbanism. The idea of the holistic neighborhood where people live, work, go to the park, go to the grocery store in surroundings that really consider the human need to be among beautiful things - that truly is wonderful. The goal to get people really involved in the planning of their community is also very laudable.

New urbanism also offers very good structured principles and guidelines regarding designing communities. All over Kamloops, we see these truly hideous structures being built and one has to think the only consideration has been dollars and cents. New Urbanism may just offer workable alternatives.

As mentioned below, Peter's talk was arranged by the very worthwhile Cultural Future of Small Cities project in Kamloops.

I have detailed notes from Peter's talk if anybody is interested.

For the last year, the Small Cities program has been exploring the cultural challenges and possibilities facing small cities in a world increasingly dominated by large urban centers, suburban sprawl, and economic globalization. Kamloops, a city of 80,000 in the southern interior of British Columbia, is the focal point for a program of interdisciplinary research, training and knowledge sharing.

My only preliminary thought about this project is that I hope that the culture of small cities is celebrated, and not lamented.

For those interested, the initiative is holding three free public sessions, Wednesday Thursday Friday this week. The first one is called " the intelligent community" and will be held May 5 from 7 p.m. to 8:30 p.m. at Sportsmart Place.

Gotta love Jim Harrison, really longstanding news director at Radio NL. Jim has always been really good to me, whenever I needed to see him about this or that. Jim also writes a weekly column, as I do, in Kamloops This Week. Jim's last column speculates on the prospects for some of the local candidates in the upcoming federal election. Here are some snippets from the column, with gratuitous commentary from me on each.

On NDP candidate Brian Carroll:
"He's a nice guy who believes in the socialist mantra, but he doesn't have the political polish or the oratory skills to pull it off."
Arjun: what exactly is political polish - is it really a good thing? Could Brian have any more unfriendly a photo of him on his campaign web site?

On Liberal John O'Fee:
"The John O'Fee factor is intriguing. Not exactly a politician who's made an indelible mark on the Kamloops landscape, but one who seems to offend few enough people to continuously do well at the local level. "
Arjun: I think John's experience and local profile could be a real asset. If I could just get him to follow through on his commitments to call my Dad, and update his web site (John, you won the nomination a month ago), all would be well.

On Conservative and sitting MP, Betty Hinton:
"She's learned it, is seen in the right places and most often says the right things. But along with learning the ropes, she's worked hard on behalf of her constituents....Hinton will probably earn herself a second term."
Arjun: Betty is a wonderful person. I have seen her give some pretty bad speeches over the past little while, but that can be improved. I think Betty and John are going to go neck in neck in the election.

I wonder why Jim didn't rate the Green party candidate, Grant Fraser. I think the Greens might have a good chance at some seats this year. 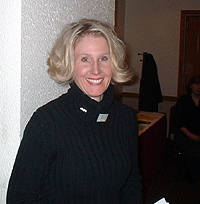 Dana Koch - a very accomplished graphic designer (Koch Ink), someone who doesn't brook much bullsh*t, and an afficionado of home made wine became President of the Kamloops Jaycees last night. This is a good thing.

Now, if they could just do something a little more inclusive with that Creed.